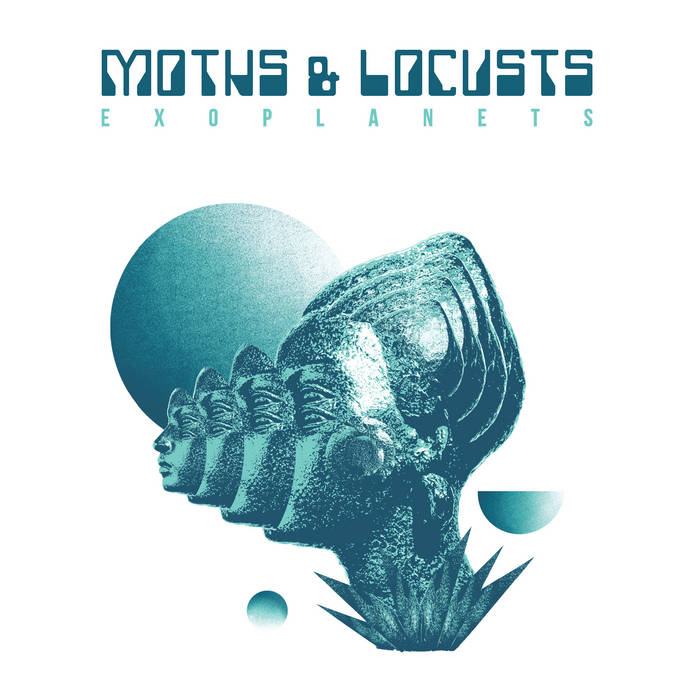 Strange Daze Radio Falling comfortably within the umbrella of Space/Psych/Stoner Rock, yet manages to create a unique sound. Very strong album, with many different moods across the 7 tracks. Favorite track: Cocaine Kangaroo.

2020 marks ten years of existential exploration for Nanaimo BC space rock sextet MOTHS & LOCUSTS, a decade that saw the band release a trio of acclaimed LPs (2013’s Mission Collapse, 2016’s Helios Rising and 2017’s Intro/Outro) alongside numerous assorted EPs and 7” singles. In addition to the aforementioned albums under their own name, they also released a double live album with legendary Can frontman Damo Suzuki in 2014, plus 2019’s Think Pink IV: Return to Deep Space collaboration album with Pink Fairies/Pretty Things man Twink.

Showing only signs of acceleration with time, their 4th LP EXOPLANETS distills several studio recording sessions from across Canada into seven elemental songs that reflect a band at the height of their power.

The album’s centerpiece is the six part, near-16-minute long title track. Exoplanets is a visceral tour through a sonic spectrum of intense emotions and otherworldly landscapes, from the haunting primary melody, through layered vocal harmonies to the cathartic, crushing climax. Recorded with engineer James Paul in a former abattoir in downtown Toronto, each band member features prominently on the track, displaying the musical versatility the band is becoming known for: guitarist Angus Barter & drummer Dave Bean’s harmony vocals on the verses bring to mind pre-Dark Side era Pink Floyd; Samantha Letourneau’s layers of flute in the opening has an element of prog rock; lead guitarist Mike Breen’s serpent-like shredding (and electric sitar) is strategically placed to drill straight through listeners' skulls. The track ends with vocalist Valentina Cardinalli’s soulful wailing and bassist Dave Read’s massive effects-laden doom choir pushing the speakers to the max.

From closer to the band’s home base of Vancouver Island BC comes triple bass psych freakout A Ram Named Drama, recorded by Scott Henderson at his Lap Of Luxury studio in Sooke; and from the band’s own Republic Of Doom studio in Nanaimo come the tracks Nero’s Surgery and Avulsion 2020. All seven tracks together form a cohesive album, one that perfectly ends one decade and begins another for a band that’s built to last.